STC dedicated the commemorative note called “NINETY” to one of the most significant Czech artists of the twentieth century Max Švabinský who would have been 145 years old in 2018.

It commemorated his personality which, in a significant and unforgettable way, has influenced the prestige of Czech banknotes. This painter and graphic artist was admired for unique drawing dexterity and perfect mastery of graphic techniques. The works of Švabinský are accompanied by an unfailing love for nature and, in his portraits, one can see a number of famous figures of that time. He belongs to a generation of artists who laid the foundations for Czech modern creative art of the 20th century. 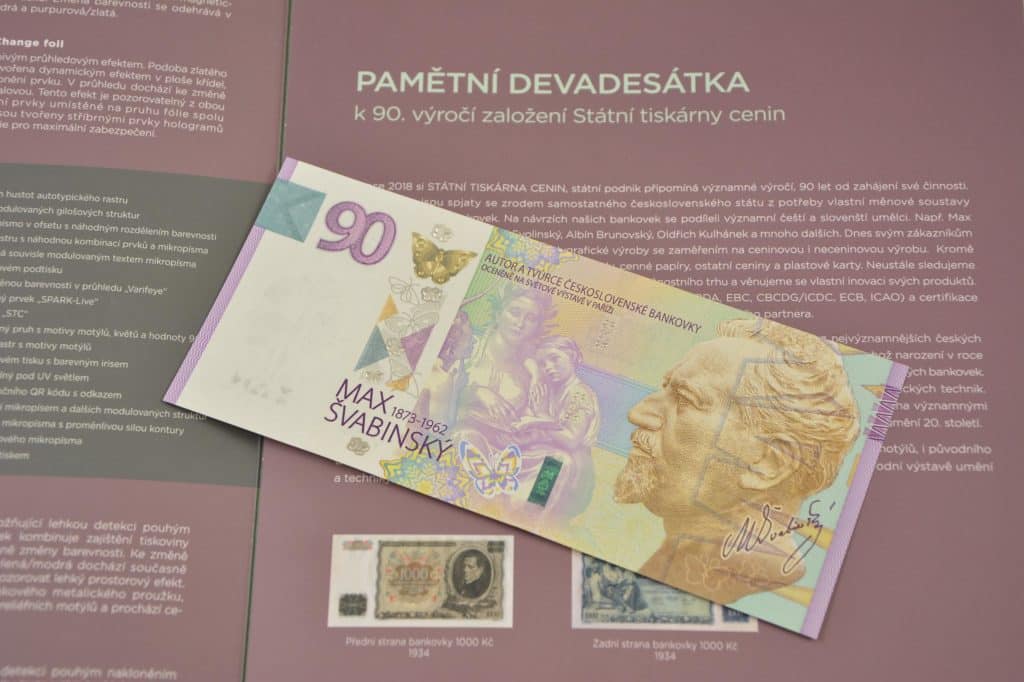 For example, the SPARK-live security element with a two-colour application of a protective feature, which is used for the first time in the world on our Ninety Crown Note. Also worth a mention is the VARIFEYE ColourChange foil, a security feature with an effective transparent effect in the shape of a golden metallic butterfly. Other features located on the band of the foil, along with the VARIFEYE butterfly, include silver hologram elements and micro-mirror technology for maximum security. Another element is the GALAXY – security thread, positioned protective elements that combine the protection of the print against changing of the image and colours. Changes to the image of MAX/STC and green/blue colour shift occur simultaneously when the feature is tilted. At the same time, a slight spatial effect can also be observed. The Galaxy element is part of the window metallic band, which is formed by the design of silver relief butterflies and passes through the entire width of the banknote.

The so-called tilting effect protection element uses the relief features of intaglio printing technology. When viewed from the front, the feature blends with the surrounding surface of the design. When tilted against light that reflects the structure of the lines, the hidden element is visible.

A big point of interest is the sculpture of the face of the republic formed by coherently modulated micro text. You can reveal the story of Max Švabinský that is hidden here only using a magnifying glass.

On the commemorative note, STC at the same time presents the latest trends in the field of security elements applicable to protection against forging of banknotes, documents and other securities. The commemorative certificate contains a total of 36 protective elements detected only by the naked eye or laboratory methods and resources. STC thus confirms that it ranks among the world leaders in the field.

Previous Post
Next Post
Let us work with cookies
With your consent, our website will be displayed to you in the way we prefer. At the same time, we will know what type of content you like and we can also record your visit. You give your consent to store cookies in your browser.
Manage options Manage third parties Manage vendors Read more about these purposes
Setting preferences
{title} {title} {title}
Scroll To Top
Získejte dárek za svůj nákup na našem e-Shopu. Více informací zde.